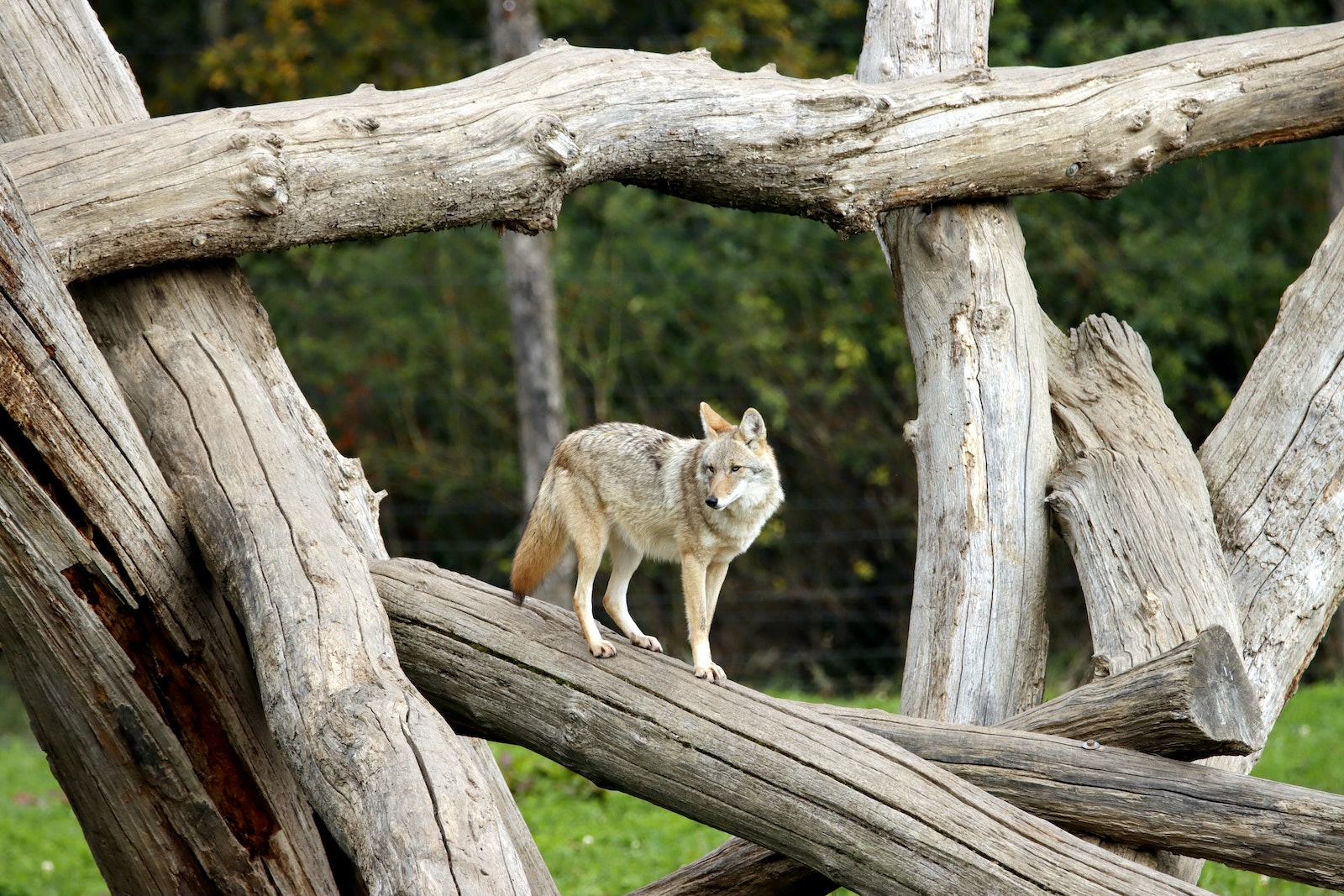 What do coyotes eat? Do coyotes eat dogs, deer, snakes, other animals and humans? Coyotes are violent predators that adapt easily to different climates. These omnivores evolved several years ago, and they belong to predatory canines. Coyotes prey on various animals, and thus, they are the most powerful members of the ecosystem where they inhabit. So, what do coyotes eat?

What do coyotes eat?

Coyotes are opportunistic carnivores, which means they will eat a wide variety of foods depending on what is available. Their diet typically includes small mammals such as rodents and rabbits, as well as insects, fruits, and berries. They will also eat larger prey such as deer, especially in areas where deer populations are high. Coyotes will also scavenge on carrion and will opportunistically eat livestock and pets if they have the chance. In urban areas, coyotes may also eat garbage and pet food left outside.

Coyotes have a close relation to wolves. But, the main difference is the size, as coyotes are comparatively smaller. The average length of male coyotes is around 3.3 to 4.5 feet, while their weight is not less than 18 pounds. Geographical factors make a slight difference in weight. Moreover, you can find variations in the fur color of coyotes. Shades of their fur range from light brown to white and gray. Coyotes hold some importance in the human world. In Mesoamerican artwork, they are represented as warriors. Lets find out what they eat

Coyotes are timid creatures, and in most cases, they flee whenever they see humans. However, whenever you come across coyotes, you have to be careful. Some coyotes get habituated to human beings. They may attach you anytime. If coyotes have approached you, it is safe to wave your arms or yell. You can also throw an object at them. But you should not run away at that time.

Coyotes are scavengers that can eat leftover foods. They can even prey on your dog, especially if they are desperate or hungry. Especially dogs that are below 50 lbs should be cautious and stay away from coyotes.

However, researchers have noticed that not all dog breeds are favorites for coyotes. Most coyotes prefer eating small dogs. They are stealthy and try to do sneak attacks. As they are scrappy creatures, they fight for food. Dog species like Daschunds and Pomeranians can become prey to coyotes.

Only larger dogs dare to fight against coyotes. Some of those breeds are Irish wolfhounds, Great Pyrenees, Akitas, and Kangals.

Coyotes do not have picky habits. Although rabbits are easy to be preyed on, these creatures have a strong sense of sound and sight. Moreover, bunnies can latch on, and they try to defend themselves with their sharp claws. Still, if you have rabbits as pets, you should cut shrubs and bushes. Coyotes try to hide behind these bushes.

Coyotes can pose a danger to your feline pets. That is why you have to save cats from coyotes. The safest option is to keep your cats indoors. However, cats also try to avoid areas that are habitats of coyotes.

It has been noted that coyotes are highly responsible for the declining population of white-tailed deer. The number of adult deer and fawns is affected by the behavior and diet of coyotes. Most commonly, these omnivores prey on deer during the winter and springtime. Coyotes prefer the spring season to hunt deer fawns.

Snakes are like slithery danger noodles. But they are not a danger to coyotes. Coyotes have the potential to eat even venomous snakes. However, the type of snakes they eat varies with their location. Throughout the USA, there are garter snakes.

Interestingly, the snakes eaten by coyotes in Pennsylvania are not preyed on by coyotes in California. However, in most cases, coyotes eat almost any type of snake. Rattlesnakes can also become prey to coyotes.

Most coyotes choose young raccoons as their prey. But raccoons can stay highly vigilant and try to stay away from natural predators like coyotes. However, not all raccoons are afraid of these predators.

In many countries, raccoon and coyote habitats overlap each other. One common thing is that both these creators prefer areas around trees. They also like to hunt in these areas during nighttime. Raccoons have a habit of eating dead coyotes when they are too hungry.

Do coyotes consume vegetables and fruits?

Although coyotes are hungry for meat, they can eat other types of food. In winter and autumn, fruits fall naturally, and coyotes like to eat them. Interestingly, coyotes like to modify their dietary patterns in different seasons.

Coyotes like to eat almost any animals that fit into their mouths. So, squirrels are prey to these creatures. Squirrels are rich in fats, carbohydrates, and protein. Thus, when coyotes eat these rodents, they get nutrients and have muscular growth.

The speed of coyotes can be up to 40 mph, whereas the squirrel’s speed is around 20 mph. Thus, it is easy for coyotes to outrun them.

Does a coyote eat wolves?

Coyotes belong to the Canidae family, which includes foxes, dogs, and wolves. Like coyotes, wolves are fierce predators that prey on deer, moose, and elk. However, if coyotes find a chance, they can eat and kill wolves. They can also prey on cougars, bears, and other similar animals.

Coyotes are smaller compared to wolves, and the fur color is also different from that of wolves. While coyotes are reddish-brown, wolves are white or gray. There are also some behavioral differences in these animals.

Bigger birds are a target of coyotes. They eat swans, turkeys, chickens, geese, and pelicans. But coyotes do not like to hunt birds regularly. Besides eating weak and old owls, these creatures prey on land animals. Another thing to be noted is that eagles and coyotes are competitors. They often fight over the carcass of different animals. As eagles are huge birds, coyotes do not eat them. Moreover, the nests of eagles are not close to the ground, and thus, they are safe from coyotes. Although coyotes cannot climb trees, they can eat bird eggs if found somewhere.

Do coyotes eat only meat?

Coyotes are primarily carnivorous, but they also eat fruits and berries when available.

Do coyotes eat only small animals?

Coyotes will eat a wide variety of prey, including small mammals like rodents and rabbits, as well as larger animals such as deer, especially in areas where deer populations are high. They will also opportunistically eat livestock and pets if they have the chance.

While coyotes will opportunistically eat small domestic animals such as cats and dogs if given the opportunity, this is relatively rare. Coyotes are more likely to target outdoor cats and small dogs that are left unattended.

Coyotes in urban areas may eat garbage if it is easily accessible to them. However, their natural diet consists mainly of small mammals, birds, insects, fruits and berries.

What do coyotes eat in the winter?

Coyotes will eat a variety of foods depending on what is available. In the winter, when small mammals are harder to find, they may eat more fruits and berries, as well as scavenge on carrion. They may also opportunistically eat livestock and pets if they have the chance.

We have discussed the eating habits of coyotes. Due to their omnivorous nature, these animals favor meat. Mammals are a substantial part of their diet. Occasionally, they prey on bigger mammals and lambs. The large animal’s dead bodies can also become the food of coyotes.

Also check Can you eat a coyote?