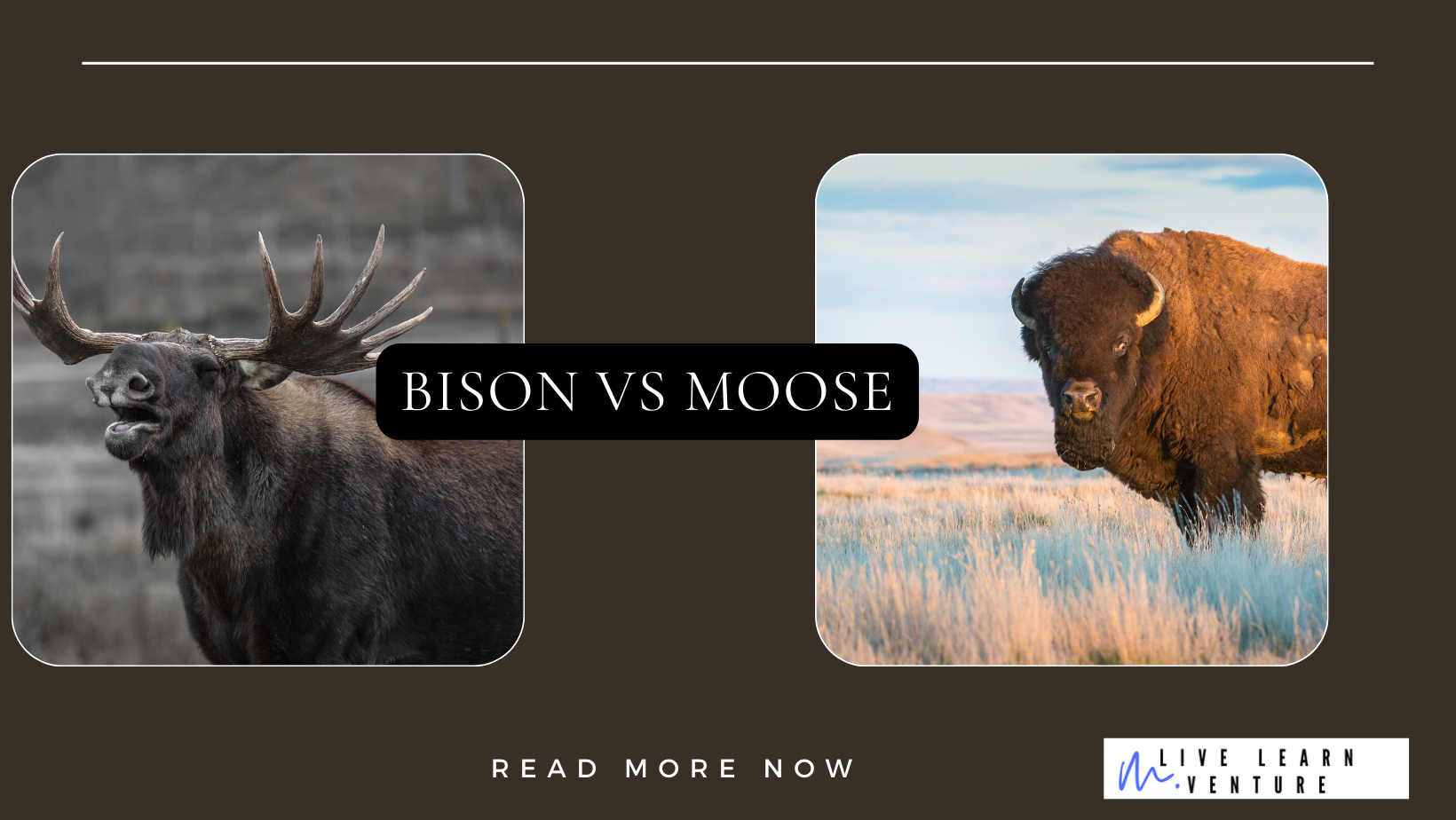 Bison vs Moose, Are you wondering what the differences? You’re not alone. Bison and moose have a lot of similarities, but there are also some key differences. Moose also looks like elk but they are different so do not get confused, In this comprehensive guide, I’ll be exploring the various differences between bison and moose, including their physical characteristics, behavior, diet, reproduction, and adaptation. I’ll also discuss the threats to both bison and moose and ways to help with conservation and preservation efforts.

Introduction to Bison and Moose

Bison, also known as buffalo, once roamed the grasslands of North America in the millions. However, the species was heavily hunted during the 19th century for their meat and hides, leading to a drastic decline in their population. Today, bison are considered an endangered species and their populations have only recently begun to recover. Despite this, bison continue to hold a special place in the hearts of many, with Indigenous cultures holding them in high regard as a sacred animal. They also play an important ecological role as a keystone species, their grazing and movement patterns maintain the diversity of grasslands.

Moose, on the other hand, have always been less abundant and less sought after for hunting. Moose are found in both North America and Eurasia, typically in forests and wetlands. They are known for their large, flat antlers and their tall, lanky builds. Moose are considered a keystone species in the boreal forest, their browsing on trees and aquatic plants shapes the structure of their habitat

Physical Differences Between Bison and Moose

One of the most obvious differences between bison and moose is size. On average, a full-grown bison can weigh up to 2,000 pounds while a full-grown moose can weigh up to 1,800 pounds. This means that bison tend to be slightly larger than moose. In addition, bison are generally taller than moose, with an average height of 6 feet compared to the average height of 5 feet for moose.

Behavior Differences Between Bison and Moose

The behavior of bisons and moose is also quite different from one another. Bisons are often seen grazing in large herds while moose tend to be solitary creatures that only come together during mating season or when they have young calves with them. Bisons are also known for being aggressive animals that will charge at perceived threats while moose have been known to be relatively docile animals that only attack if provoked or threatened directly. Bison are also more active than moose. Bison have been known to run up to 30 mph, while moose can only reach speeds of 15 mph. Bison are also more vocal than moose and have been known to make a variety of sounds, including grunts, bellows, and snorts. Moose, on the other hand, are usually silent and communicate mainly through body language.

See also  Caribbean Snakes-What kind of snakes are in the Caribbean?

Bison live in grasslands and woodlands, while moose are mostly found in boreal forests and wetlands. Bison also prefer to graze on grasses, while moose feed on aquatic plants, shoots, and leaves. Bison are also known to eat up to 80 pounds of food in a day, while moose typically eat only 15-30 pounds per day. Bison and moose also have different feeding patterns. Bison graze throughout the day, while moose prefer to feed in the early morning and late evening. Bison also have a longer digestive system, which helps them to break down the tougher plant material they consume. Moose, on the other hand, have a shorter digestive system and rely on fermenting their food to extract the nutrients.

Reproduction Differences Between Bison and Moose

Bison and moose also differ in their mating habits. Bison typically have a single male and female mating pair, while moose have multiple mating pairs. Male bison also compete for females by engaging in head-butting contests, while male moose engage in antler-clashing battles.

Adaptation Differences Between Bison and Moose

Bison and moose also have different types of antlers.

Bison have curved horns that are used for protection and dominance, These horns are not shed annually like antlers of moose and other deer species. The horns are made of keratin, the same protein that makes up human hair and nails. They are found on both males and females and are used primarily for defense and dominance during mating season. Both males and females bison use their horns to fight off predators and rivals.

Moose antlers are large, palmate structures that are unique to the male moose. They can grow up to 6 feet wide and weigh up to 40 pounds. The antlers are made of bone and are covered with a velvety skin called velvet. During the summer, moose will grow new antlers, which are soft and covered in velvet. But as winter approaches, the velvet dies and the antlers harden. The moose will then use their antlers to defend their territory and attract mates during the breeding season. Antlers are also used by hunters as a trophy. It’s also worth mentioning that Antlers are shed annually, typically in late winter, and grow back bigger the following year.

moose vs bison who would win

In a fight between bison and moose, most experts agree that the bison would come out victorious due to its size and strength advantages mentioned above. It’s true that a full-grown bull moose has antlers that could do some damage against a smaller opponent like a bear but its antlers aren’t enough to compete with a large and powerful animal like a bison. Plus, with its long legs, sharp horns, and heavy head/shoulders combination punch; the bison is more than capable of fending off any attack from a much smaller animal like a moose.

What is bigger a bison or moose?

if you are referring to overall size including antler spans, then the bison is bigger than the moose.

What is stronger a moose or a bison?

What animal can defeat a bison?

Large predators such as wolves or bears may be able to overpower a bison in certain circumstances. In addition, humans with modern firearms and vehicles have also succeeded in hunting bison in the past.

Are moose related to buffalo?

While moose and buffalo both belong to the same animal family (Bovidae), they are not closely related. Moose are part of the deer family and are most closely related to elk, while buffalo belong to a subfamily called the Bovinae which also contains goats, sheep, and antelopes

Threats to Bison and Moose

Conservation and Preservation of Bison and Moose

In addition to conservation and preservation efforts, there are also a variety of public education and awareness programs that are helping to raise awareness of the threats to bison and moose populations. These programs are helping to educate people about the importance of conserving and preserving these species.

From size differences to preferred habitats and behaviors, there are plenty of ways in which bison and moose differ from one another! Knowing these facts about both animals can help you better appreciate their unique qualities and understand why each species is so important for our environment! So next time you spot a majestic bison or a regal Moose on your travels, take a moment to appreciate all their fascinating features!