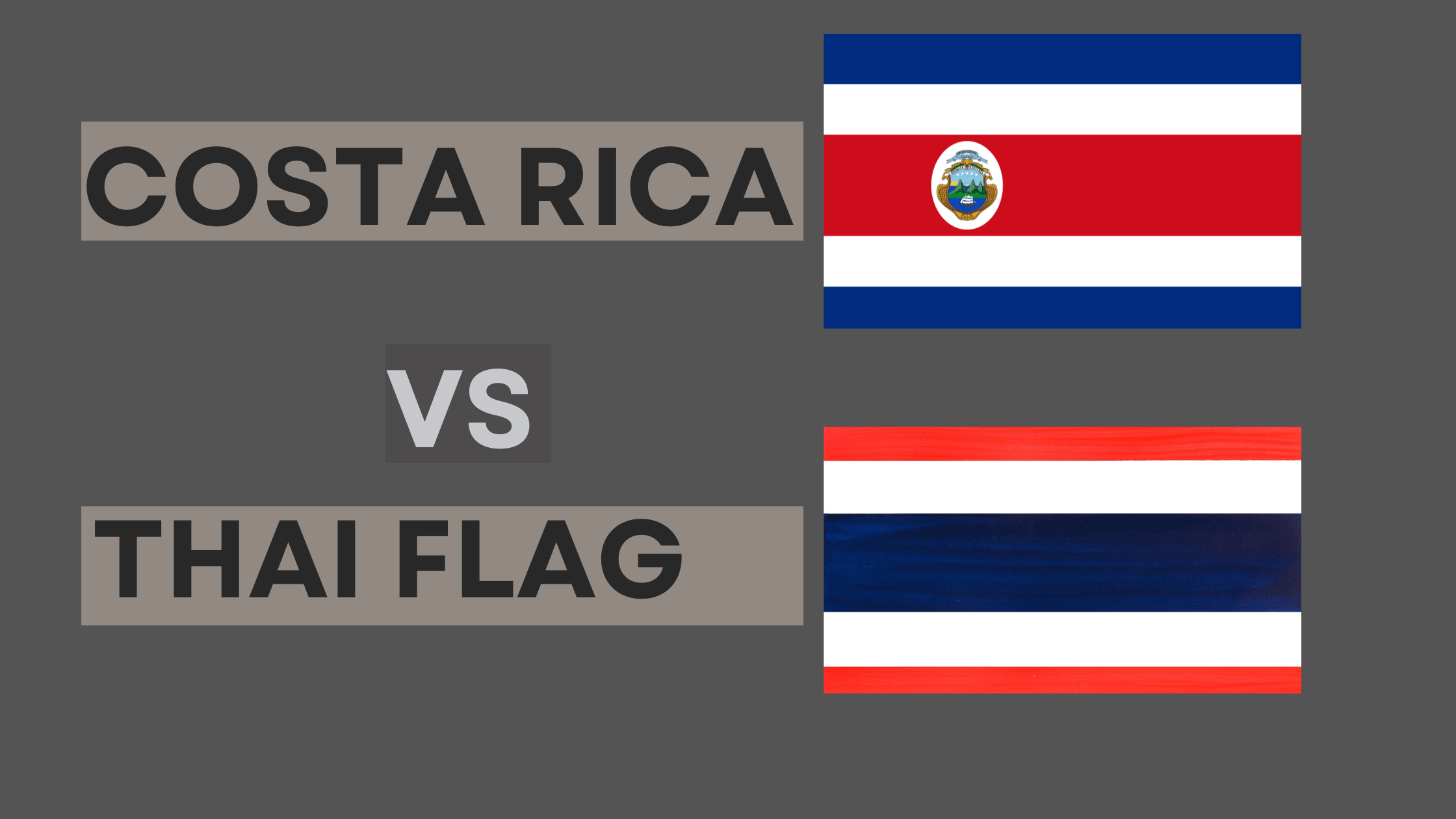 Costa Rica flag Vs Thailand flag? Have you ever felt these countries have similar flag? let us a have a deep look into their country flags, Flags are more than just a piece of cloth with colors and symbols on them they represent the history, culture, and values of a nation. In this blog post, we’ll be comparing the flags of Costa Rica and Thailand to see what kind of stories their flags tell us about each country.

Do Costa Rica and Thailand have the same flag?

The answer is “No”, Thailand and Costa Rica do not have the same flag. The flag of Costa Rica features five horizontal bands of blue, white, red, white, and blue, with a large red and blue coat of arms in the center of the white band. The flag of Thailand features five horizontal bands of red, white, and blue, with the blue field being twice as wide as the red and white fields. The color sequence and ratio are not the same in both flags, also the Costa Rica flag has a coat of arms on it, while the Thailand flag doesn’t have any symbol or emblem on it.

There are many differences between the Costa Rica flag and the Thailand flag. The Costa Rica flag is Blue, white, red, white, blue and a large red and blue coat of arms in the center of the red band, while the Thailand flag also known as the “Tricolor flag,” features five horizontal bands of red, white, blue, white and red with the blue field being twice as wide as the red and white fields.

So, the main difference is that the flag of Costa Rica has an additional coat of arms in the center of the white band and the flag of Thailand is a Tricolor flag.

Real Meaning behind the both the flags.

The flag of Costa Rica features five horizontal bands of blue, white, red, white, and blue, with a large red and blue coat of arms in the center of the white band. The colors of the flag are said to symbolize the following:

The coat of arms on the flag features several important symbols:

See also  Flags of the World: What country has a Green Yellow Blue flag?

In general, the flag of Costa Rica represents the nation’s ideals of peace, prosperity, and freedom, as well as its location between two oceans and its rich natural beauty.

A little history states that the flag used in Thai was adopted in 1917 when the country became a constitutional monarchy. Before this time, the Thai was known as Siam. So, the colors of the flag are known to symbolize different things. It is worth noting that blue symbolizes democracy, white stands for purity, and red represents bravery and sacrifice. Therefore, understand that the flag has meaning linked directly to the motto of the people.

The Thai flag is a symbol of Thai national pride and unity. The red, white, and blue colors represent the nation’s three main ethnic groups:

Why did Thailand change their flag?

Thailand changed its flag in 1917, when the country was proclaimed a constitutional monarchy. The addition of the Thai crown was intended to symbolize the sovereignty of the nation, in contrast to its former status as a protectorate of Siam.

Which country flag is similar to Thailand?

What are the two flags of Costa Rica?

Costa Rica has only one official flag