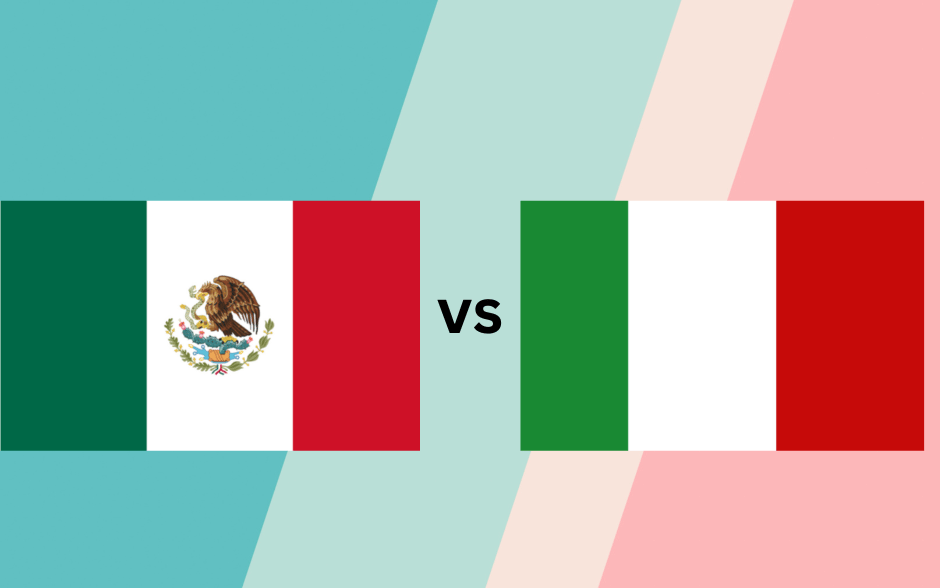 Lets check the difference between Mexico vs Italian Flag, Mexico and Italy are two countries that are separated by oceans and cultures, but what they share in common is their flags. Both the Mexican flag and Italian flag are bright, vibrant and full of symbolism. The Mexican flag is a combination of green, white and red and is known for representing independence, unity and sovereignty. The Italian flag, on the other hand, is a combination of green, white and red and is said to represent hope, faith and charity. Both flags have their own unique meanings, origins and histories, but the similarities between them are striking. Both flags are very similar in color, shape and size and are used to represent their respective countries. In this article, we will be taking a closer look at the Mexican and Italian flags, comparing their features and discussing the similarities of the flags and differences between the two.

There are also arguments about the historical significance of each flag. The Mexican flag was designed in 1821, when Mexico achieved independence from Spain. The Italian flag was designed in 1946, when Italy became a republic. Some people believe that the Mexican flag is more representative of Mexican history and culture, while others believe that the Italian flag represents a more unified Italy.

The flag of Mexico, known as the Mexican tricolor, features three vertical bands of equal size in the colors of green, white and red. The current design of the flag was adopted on September 16, 1968, but the colors and design have been used in Mexican flags since the 19th century. The green stripe stands for independence, the white for purity, and the red for unity among Mexicans from all social classes. In the center is an emblem representing Mexico that consists of an eagle perched atop a cactus with a snake in its mouth. According to legend, this scene represents the founding of Tenochtitlan, which was located where Mexico City stands today.

What does the eagle on the mexican flag mean

The eagle on the Mexican flag is a symbol of the Aztec heritage of Mexico. The eagle represents the Aztec god Huitzilopochtli, who was the god of the sun and war. The eagle is depicted on the flag perched on a cactus, with a snake in its beak. The cactus represents the place where the Aztecs believed they were instructed by Huitzilopochtli to build their city, Tenochtitlan. The snake represents the Aztec god of fertility, Quetzalcoatl. The image of the eagle and snake symbolizes the Aztec belief that the sun and war were necessary for the survival and prosperity of their civilization, as well as the balance of nature and human society.

See also  Greenland flag meaning: How It Represents a Nation's Pride and Identity

The Italian flag has three vertical stripes in green, white, and red too. However, unlike the Mexican flag there is no emblem in the center. Instead, it features an emblem known as Il Tricolore (which means “three colors” in Italian). This symbol is said to represent hope for Italy’s future. Additionally, according to tradition each color of Il Tricolore holds special significance: green for hope; white for faith; The flag of Italy was officially adopted by the newly formed Kingdom of Italy on January 7, 1797. The flag, designed by a group of Italian intellectuals, features three equal vertical bands of green, white, and red. The colors are said to represent hope (green), faith (white), and charity (red). The current flag has been in use since 1948, with a change in the shade of the colors. The flag was first adopted during the Risorgimento, the movement that led to the unification of Italy in 1861.

Fun Facts About the Flags

Both Mexico and Italy have colorful histories that are reflected in their national flags. The combination of colors gives both flags a sense of patriotism that resonates with citizens throughout their respective countries. Even though they share many similarities such as color combinations and symbolic value attached to each element – they differ because Mexico’s flag has an emblem in its center while Italy’s does not. Nevertheless both are powerful symbols that represent their nation’s pride!