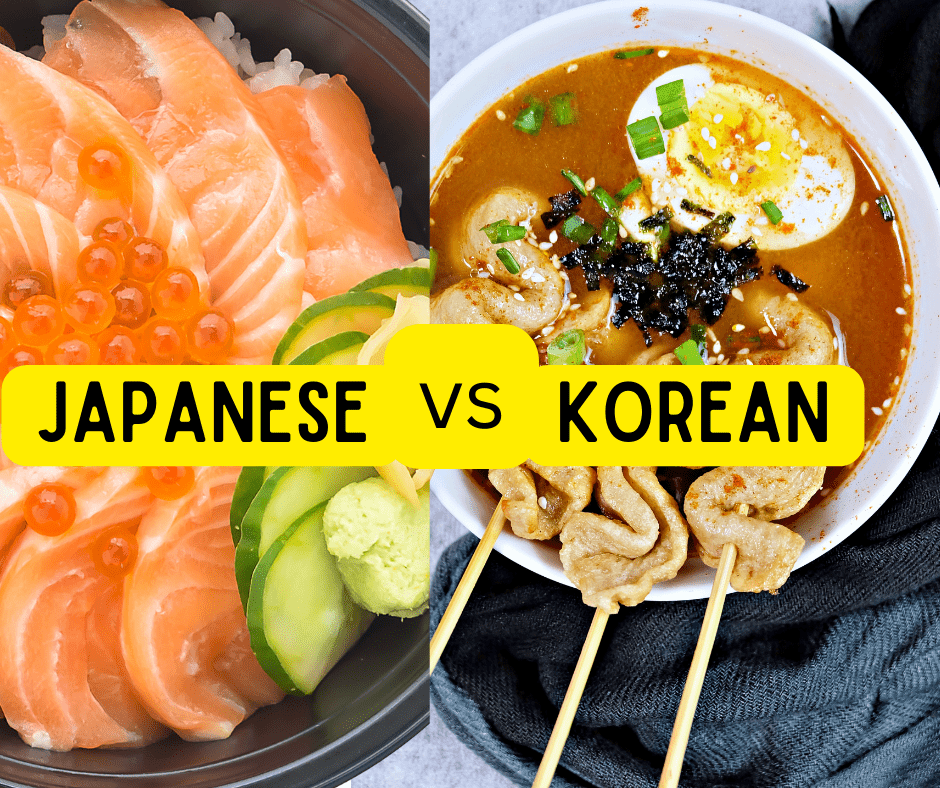 If there is one thing you must know, it is the fact that the culinary dishes eaten in East Asian nations are termed the healthiest meals ever.  To buttress this point, research carried out in 2018 by the National Geographic report states clearly that Korea and Japan are rated among the top countries with the most extended lifespan.  Let’s take a cursory look at Korean food versus Japanese food without much ado.

Things to Know About Korean Food Vs Japanese Food

Is there a difference when you place Korean food and Japanese food side by side? The answer is yes! Keep reading to learn more.  Some of the things you should know about Japanese and koreans meals are:

As an island nation, Japan has lots of seafood. Therefore, seafood is a good source of protein. More so, with its small islands and plenty of mountainous terrain, this nation has short-flowing rivers.  Since these flowing waters barely contain impurities, they assisted in the advancement of Japanese food. As a result, most of their meals comprise boiled, raw, and subtly seasoned delights.

Japan’s food concept revolves around selecting the freshest items and making little changes. These little changes will enable the eater to taste the original texture of the meal.  This means that most of the food on the menu at a Japanese restaurant is either boiled or grilled. And sometimes, it stays in its raw form. In simpler terms, Japanese meals are mellow, nutritious, and rarely spicy.

As a peninsular region, Korea has unrestricted access to the sea, so you will find lots of protein-rich seafood in their meals. But unlike Japan, the meals in Korea have plenty of spices and meat.

More so, their food is filled with fermented elements; one can see this in their famous kimchi cuisine. Interestingly, Korea makes use of diverse cooking methods.  These cooking methods range from stir-frying to grilling and even barbecuing.

When faced with Korean food versus Japanese food, it must be noted that there are many differences between the meals.  Some of these differences are:

1. The Taste
Most people claim that the significant difference lies in their taste. So, while Korean meals have robust flavors, Japanese meals only have bolder tastes. However, it must be noted that the different tastes result from the vegetables or spices used in preparing the meals. For example, while Koreans enjoy adding lots of garlic and chili pepper to theirs, Japanese use very few ingredients. To understand this deeper, remember that the traditional Japanese dish judiciously follows the ideology of one soup and three vegetables. This means that their dishes are uncluttered and clean.

They concentrate on the food’s natural flavor, so seasoning is kept to a minimum. They only change the natural flavor of their meals after they have been cooked, not during the cooking process.  They use wasabi or soy sauce when they are eating sushi. On the other hand, Korean meals use sauces and spices that play a large part in the flavor of the food.  They make use of chili peppers in seasoning. So while you have many spices to deal with when eating Korean meals, you will not deal with such in Japanese meals.

2. The healthiness of the food

Regarding how healthy their foods are, it is imperative to note that Japanese food is often described as “uber-healthy.” The major reason for this description is that the food is eaten either grilled or raw.  In other news, they barely use oil in their cooking. When its umami is controlled sensitively, the foods are low in salt and calories with high nutritional values.

Furthermore, Japanese foods use few animal products compared to their Korean counterpart. This means that Korean foods have more meat.  While Korean meals are healthy, they brim with colorful vegetables and fruits. Nevertheless, there are still some healthy options available in Korean cuisine.

Koreans’ eating etiquette focuses on being well-mannered and polite. However, their Japanese counterpart has a more relaxed approach to dining etiquette.  For Koreans, you must use both hands to pass the dishes. Also, as you eat, it must be done quietly and carefully; thus, slurping is disrespectful.  While sitting at the dining table with older adults, everyone waits for the oldest to pick up their chopsticks first. And when it is a business meal, the seating arrangement is based on everyone’s social ranking.

In other words, the lowest-ranked or youngest will sit closer to the door while the senior-ranked or oldest sits first. But, more importantly, you will pour drinks for others and allow them to pour yours.  Meanwhile, their Japanese counterpart has a more complex eating etiquette that everyone must adhere to. Some of these revolve around cooking meals in a specific and traditional way.  Interestingly, you will have to greet the chef and staff before eating. Plus, your cutlery must be kept in a specific place on the table when you are done eating.

4. Their cooking and preparation styles

If you have been reading closely, you will realize that Japanese meals are prepared and cooked either unseasonable or in a way that keeps them raw. They use small amounts of oil.  And they use plenty of water for boiling, stewing, or even steaming. The kitchen knife is sharp and tagged “santoku.” The Santoku has specific uses for cutting, chopping, and slicing.

Fish is a vital ingredient in their meal, so the chefs should use special knives to prepare their fish. Meanwhile, Korea’s raw foods and meat are seriously marinated with sauces and spices.  Koreans are known to flavor their food before it is cooked.

The popular cuisines native to Japan are sashimi, ramen, and sushi. While you will find these all over the world, they originate in Japan. and are eaten following the culture of Japan.  The dishes native to Korea are kimchi, barbecue, and grilled meat. Note that kimchi is a side dish. It is the side dish used to add flavor to every other dish.

See also  Is Korean hard to learn? The Truth About Learning Korean

It has been stated over time that the most significant difference between Japanese and Korean sushi lies in the rejection of the famous wasabi.  Rather than use wasabi in Korean sushi, they replace it with gochujang. Gochujang is a spicy yet fermented red pepper sauce. It has a comparable heat and does not have wasabi’s tingling sensation.

Nevertheless, the essential components of fresh fish and cooked rice follow the Japanese sushi style. One secret you must know is that Japanese chefs usually train Korean sushi chefs. Surprised? The Japanese chefs can help them highlight the importance of flawless preparation. Nevertheless, Koreans still infuse seasonings and flavors into their cooking.

While both Korean and Japanese foods are healthy, we have provided specific details on the differences between both. Ensure you read through this article to spot the differences.

1 thought on “Korean vs Japanese Food”